Before establishing a guardianship or conservatorship, consider less restrictive alternatives.

A full or plenary guardianship, which results in the loss of all individual rights of the protected person, should be used as a last resort. The Uniform Guardianship and Protective Proceedings Act (UGPPA 1997) advises the court to appoint a guardian or conservator only if it finds by clear and convincing evidence that the respondent is incapacitated and his or her needs cannot be met by less restrictive means (§ 311).

Recommendations from the Third National Guardianship Summit (2011) advise courts to implement the least restrictive alternative and maximize the person's right to self-determination and autonomy (Recommendation #2.2). Specific actions are suggested below:

States should eliminate plenary guardianship, allowing people to retain the maximum of rights and if guardianship is imposed, require tailored guardianship orders in all cases.

Capacity instruments help to assess the functionality, trajectory and protection needs of a proposed guardianship or conservatorship. See the following examples:

What alternatives can be considered?

The National Probate Court Standards (Standard 3.3.10) encourages courts to appoint a guardian or conservator only if no less intrusive alternatives exist. Limited guardianships/conservatorships or protective orders that are limited and tailored to the respondent's particular needs and functional capabilities are preferred over full/plenary guardianships and conservatorships. The Standards suggest the following alternatives be considered. 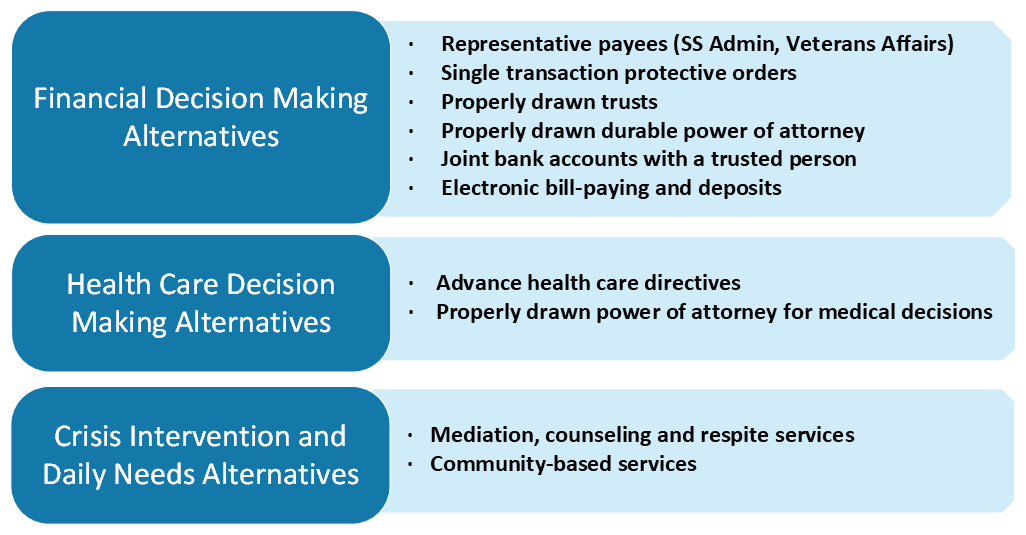 Have other alternatives not worked? Consider mediation.

The use of mediation as an alternative to guardianships and conservatorships or to settle disputes once a guardianship/conservatorship is established, has been somewhat controversial. In an article in the Stetson Law Review (2002), "Is the Use of Mediation Appropriate in Adult Guardianship Cases?," the author notes that mediation can be a beneficial way of resolving disputes, but it must be considered in the context of ensuring that the rights of the respondent remain the focal point of the mediation.

An evaluation of Alaska's mediation program (2009) for guardianships and conservatorships concluded that "mediation for adult guardianship cases with significant conflicts appeared to be successful in most instances." In addition to Alaska, several state court systems and individual courts have established mediation programs.

The various alternatives to a guardianship or conservatorship will not meet everyone's needs. In addition, the less intrusive alternatives are prone to abuses when the person placed in authority does not act in the best interests of the individual placed under his/her authority. Because there is no judicial oversight, abuses that occur under these alternative arrangements often go unnoticed for long periods of time. For example, in 2008 the AARP Public Policy Institute released a report on Power of Attorney Abuse, which demonstrated the misuse of powers of attorney and encouraged states to adopt the Uniform Power of Attorney Act (UPOAA).

Receive online interactive training to support someone who needs help making decisions and managing life. This course also helps those who want to plan for their own future or need help now – and explains legal concepts in plain language.