The collection of reliable data is besieged by a number of problems.

How many guardianship cases are there in the United States? We do not know. To date, we do not have an accurate assessment of the number of open adult guardianship and conservatorship cases. 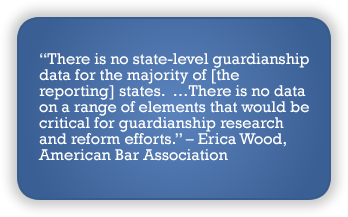 Generally, the "official" court data at the state level is unreliable or not available. In a 2006 exploratory study of state guardianship data, the ABA Commission on Law and Aging found that many state court administrative offices did not receive information on guardianship from trial courts and noted that the majority of reporting states could not provide state-level data. The problem is compounded by the lack of statewide case management systems that can identify case events for guardianships and conservatorships. The lack of state-level data requires researchers to focus on local courts, the only source of accurate and reliable guardianship data.

In 2010, the National Center for State Courts (NCSC), on behalf of the Conference of Chief Justices/Conference of State Court Administrators Joint Task Force on Elders and the Courts, presented results from a survey of judges and court managers on guardianship issues, including the collection of data. The results, compiled in Adult Guardianship Court Data and Issues, confirmed that quality data on adult guardianships continues to be problematic. In particular, courts may have some information on filings but have more difficulties tracking caseloads, as these cases can remain open for years and sometimes decades.

In 2014, NCSC, under a contract with the Administrative Conference of the United States, conducted a survey of adult guardianship/conservatorship court practices. The survey of judges, court staff and guardians focused on the following topics: selection of guardians, monitoring practices, case management, sanctions and removal of guardians, caseload trends and court outreach.  The final report, SSA Representative Payee: Survey of State Guardianship Laws and Court Practices, includes survey findings, a review of state statutes on adult guardianships/conservatorships and a summary of interviews with state adult and foster care agencies. The need for improved data collection continues to remain high, according to a subsequent survey administered by NCSC in 2020, as even seemingly basic data elements, such as date of birth, are not routinely captured.

"Official" court data is collected through the Court Statistics Project (CSP), which is a joint effort by NCSC, the Bureau of Justice Statistics, and the Conference of State Court Administrators. The State Court Guide to Statistical Reporting offers a consistent, nationally recognized model for bridging the terminology differences among state legal systems and distinguishing these civil case types from each other. A review of the guardianship data indicates:

Deficiencies in the statewide collection of data on the number of active cases are compounded by the lack of statewide case management systems that can identify key case events for guardianships and conservatorships. Further, some states cannot distinguish between guardianships granted to children, incapacitated young adults and elders. Finally, the inconsistent use of terminology across states makes the collection of systematic national data challenging.

The insufficiency of guardianship data has been noted by federal legislators and state courts.

The calls for documentation of guardianship cases have increased while the availability of reliable data has changed little. In 2011, NCSC released Adult Guardianships: A "Best Guess" National Estimate and the Momentum for Reform. The report acknowledges current statistical limitations and focuses on data from four states to develop an estimate of 1.5 million active pending adult guardianship cases in the United States. This estimate does not include adult conservatorships, for which data is not available.