Elder Protection Courts are more specifically designed to address the needs of older persons who have been victimized, neglected, or exploited. The concept derives from Hon. Julie Conger, who started the nation's first Elder Protection Court in the Superior Court of California, Alameda County (see Creating Multi-agency Responses to Elders in the Courts). Although this elder protection court no longer operates, adaptations of the model have been implemented in the Superior Court for Ventura County. The Judicial Council of California has also completed an evaluation of court-based elder initiatives, with information and promising practices compiled in Effective Court Practice for Abused Elders (2008).

In 2009, the California Superior Court, County of Ventura, established an elder abuse court to hear "368" cases. Cases eligible for the court are identified by the District Attorney's Office and heard by a designated judge in a courtroom that has a separate observation room for vulnerable witnesses and victims. The ability of the court to identify and focus on "368" cases stems from a collaboration between courts, prosecutors, public defenders, legal aid and local service providers. For more information (see Elder Abuse Cases: Proposed Performance Measures for Courts).

Florida established the first Elder Justice Centers (EJC) in the country in Hillsborough County and Palm Beach County (see Creating Multi-agency Responses to Elders in the Courts). Elder Justice Centers bring the courts together with a variety of agencies to address a broad range of issues that may impact older persons.

The 13th Judicial Circuit Elder Justice Center (EJC) is a court program designed to assist persons aged sixty or older who are involved in the court system through guardianship, criminal, family or other civil matters. The goals of the EJC include:

The EJC was created in 1999 through the work of a community task force to increase access to the court system and to social and legal services for older adults. The partners in the EJC include Adult Protective Services, Aging Solutions, Bay Area Legal Services, Clerk of Circuit Court, Guardianship and Probate Division, West Central Florida Area Agency on Aging, SALT Council (Seniors and Law Enforcement Together), Long-Term Care Ombudsman Council and Crisis Center.

Examples of two court connected programs that assist elder abuse victims to obtain protection orders are described in "A Multi-Site Assessment of Five Court-Focused Elder Abuse Initiatives," conducted by the American Bar Association Commission on Law and Aging and the Kentucky college of Public Health/Department of Gerontology. The programs are multi-agency collaborations in Jefferson County, Kentucky and in Kings County, New York.

The guidelines reflect the need for judges and court staff to understand the dynamics of elder abuse; for effective court management of elder abuse cases, which includes accommodations for the special needs of older victims and witnesses; and for court engagement with community partners to create more comprehensive and effective approaches to preventing and addressing elder abuse. The principles underlying the guidelines have influenced the development of best practices for courts, prosecutors and community based service providers. The following recommendations provide examples of these principles. 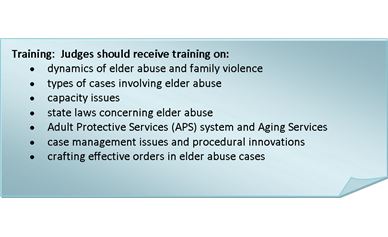 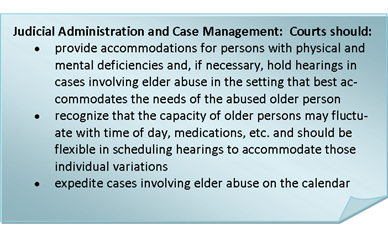 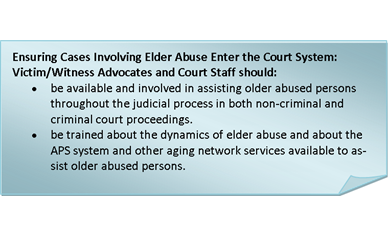