The History behind the Center for Elders and the Courts

It seems like yesterday when my colleague, Denise Dancy, and I sat around the table brainstorming how we could create an agenda that would help courts address elder abuse and neglect issues.  The need was there:  the “baby boomers” were headed into the traditional retirement years and elder abuse remained a “hidden” crime with limited resources available to the courts.  Yet when I look back at our earlier efforts, I’m surprised to see that it’s been almost 9 years since we first featured elder abuse in our former publication, Family Violence Forum (Spring 2003).  This newsletter sparked our plans to address elder issues in a more concerted way.

In 2005, we set out to create the Elder Abuse and the Courts Working Group (EACWG).  We invited leading elder abuse experts from a variety of disciplines to join our efforts.  We were amazed that nearly all invitees happily accepted our invitation.  Having an expert group assembled, it was time to create an agenda and bring the group together at NCSC headquarters in Williamsburg, Virginia.  With a small grant from the Archstone Foundation and  support from our leadership we were able to host a meeting in April 2006.  As I look back at our list of 28 participants I regret that we did not take a group photo! 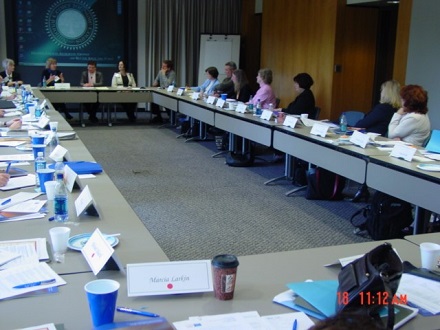 We had a very ambitious agenda.  Our meeting goal: “To gather national experts to strategize on effective strategies courts can take to improve the identification of and response to elder abuse and neglect.”  And strategize we did. Three products were conceived at this meeting.  First, we drafted a white paper, State Courts and Elder Abuse: Ensuring Justice for Older Americans.  Second, we created an outline for a benchcard for judges who may handle cases in which an underlying issue of abuse or neglect is present.  Finally, the meeting propelled our efforts to create a more visible presence and resource center through the Center for Elders and the Courts.

Synergy was on our side.  During this same time period, the Conference of Chief Justices (CCJ) and the Conference of State Court Administrators (COSCA) began to address elder issues.  Both groups endorsed the white paper on state courts and elder abuse.  In May 2008, members of CCJ met in Philadelphia for a Pew symposium on leadership; they chose elder issues as a primary focus for the symposium.  It was here that the idea for a CCJ/COSCA Joint Task Force on Elders and the Courts was introduced.  Today this task force is a standing joint committee.

In 2008, a generous grant from the Retirement Research Foundation (RRF) of Chicago helped us turn our vision into reality.  The grant allowed us to create the Center for Elders and the Courts.  The website was launched in 2010 and in 2011, in partnership with the Center of Excellence on Elder Abuse and Neglect, we introduced an elder abuse curriculum for state judicial educators.  We subsequently received grants from the RRF and the State Justice Institute to expand our work.   These grants  have supported the development of:

Adding to the CEC's growing body of resources, in 2012, the CEC published separate elder abuse toolkits for the courts and prosecutors (with funding from the Bureau of Justice Assistance).  In addition to continuing our strong relationship with CCJ and COSCA, we have worked closely with the National College of Probate Judges to better address guardianship and conservatorship issues, and released updated National Probate Court Standards in 2013.  The future is exciting.

Finally, a word about us:  I work with an exceptional group of dedicated colleagues.  Through the CEC, we will continue to provide updates and address the pressing issues of our aging population that confront our nation and our courts.

Finally, a note of thanks to all those who have supported our efforts through the years:  the Archstone Foundation, the Retirement Research Foundation, the Bureau of Justice Assistance, and the State Justice Institute.  The CCJ/COSCA Joint Committee on Elders and the Courts continues to be a guiding force for much of our work.  Our advisory board members have dedicated their time and expertise to helping us develop the CEC: Mike Bridenback, Hon. John E. Conery, Hon. Julie Conger (rtd.),Hon. Janice Martin, Rebecca C. Morgan, Mary Joy Quinn, and Hon. John Voorhees.